How do I control the number of decimals for summary means in Summary reports?

How do I control the number of decimals for summary means in Summary reports?

There are two methods to control or force the number of decimals accuracy.

Caution: Forcing number of decimals to 0 or 1 in General Summary Report Options is very likely to hide important differences for small treatment means, such as yield values less than 25.

To override a default set by method 1, enter the number of decimals of accuracy desired in the Number of Decimals plot data header for each data column. Enter a "0" to force means to print as whole number with no decimals reported.

The number of decimals field is usually located at the bottom of plot data headers so you may have to scroll the data header window down to display this line. If some older GDM study definitions, it is the second entry field included on the same line as the number of subsamples. The data header prompt may appear as:

Why do some treatment means have the same mean comparison letter when the difference between means is larger than the reported LSD?

Why do some treatment means have the same mean comparison letter when the difference between means is larger than the reported LSD?

Duncan's MRT, Student-Newman-Keuls, and Tukey's tests do not separate means the same as LSD. The mean comparison tests included in ARM are LSD, Duncan's MRT (called Duncan's New Multiple Range Test), Student-Newman-Keuls, Tukey's, Waller-Duncan, and Dunnett's. Mean comparisons based on LSD have often been criticized because the significance level "slips" when the number of treatments increases. (See 'AOV Means Table Report Options' in ARM Help for more information on mean comparison tests.)
If a group of treatment means are sorted in order from high to low, then Duncan's and LSD give approximately the same result for adjacent pairs of treatment means. (Adjacent pairs of treatment means are those beside each other when sorted in order from high to low.)
With Duncan's and Student-Newman-Keuls, the minimum value for significance becomes larger for mean pairs that are farther apart in the sorted list.
Both LSD and Tukey's use the same value for all tests, but the Tukey's value is quite large when compared to the LSD. (Thus, there are fewer significant differences.)

Why do all treatment means have "a" as the mean comparison letter?

Why do all treatment means have "a" as the mean comparison letter?

Following is a description of the reason for this difference with data that has been transformed using square root. The description is from page 156 of the "Agricultural Experimentation Design and Analysis" book by Thomas M. Little and F. Jackson Hills, published 1978 by John Wiley and Sons. The discussion is regarding insect count data that was not normally distributed because many of the insect counts were very low - instead the data followed a Poisson distribution. The data was transformed and analyzed, means were calculated from the transformed values, then detransformed to the original units.

"The means obtained in this way are smaller than those obtained directly from the raw data because more weight is given to the smaller variates. This is as it should be, since in a Poisson distribution the smaller variates are measured with less sampling error than the larger ones."

Another way to say this is "The weighted means are more correct because the means are calculated from data where the original heterogeneity problem has been fixed."

What should I do if my data does not meet the assumptions of AOV?

What should I do if my data does not meet the assumptions of AOV?

There are several assumptions that the AOV analysis makes about the data in order to draw conclusions. The two assumptions that ARM tests for are:
If these assumptions are not met, the resulting analysis may be completely invalid:
“Failure to meet one or more of these assumptions affects both the level of significance and the sensitivity of the F test in the analysis of variance [AOV].” (Gomez and Gomez; Statistical Procedures for Agricultural Research pp.294-295).
There are a few things a researcher can try in order to “correct” the data to fit the assumptions of AOV. It should be stressed that these techniques are not “fudging” the data, but rather applying statistically-sound, industry-standard processes in order to compare the treatment means to get the mean comparison letters on the report. With ARM, these techniques can be automatically suggested using the option “Apply automatic transformations or treatment exclusions…” on the General Summary Report options.
The purpose of applying a transformation is to work with data that fits the assumptions of AOV – a transformation often fixes non-normality and/or non-homogeneity of variances by reducing the scale of the data. Note that it can be statistically and mathematically proven that:
“because a common transformation scale is applied to all observations, the comparative values between treatments are not altered and comparisons between them remain valid.” (Gomez and Gomez; Statistical Procedures for Agricultural Research pp.299)
Since the transformed data and resulting means will be on a different scale, use the “De-transform means” option on the General Summary report options to de-transform the means into the original units. Note that this does not affect any results.
If none of the above correction techniques are able to fix non-normality and/or non-homogeneity of variances, the AOV analysis cannot be expected to be significant. Further statistical analysis will need to be performed in order to draw conclusions from the data.
Back to Top

How does ARM calculate the Standard Deviation for the AOV Means Table report?

How does ARM calculate the Standard Deviation for the AOV Means Table report?

By definition, standard deviation is the square root of variance. The standard deviation reported by ARM is the square root of the Error Mean Square (EMS) from the AOV table. When trial data is analyzed as a randomized complete block (RCB), ARM performs a two way analysis of variance (AOV). As a result, both the treatment and the replicate sum of squares are partitioned from the error sum of squares.

What is the difference between Bartlett's and Levene's tests of homogeneity of variance?

What is the difference between Bartlett's and Levene's tests of homogeneity of variance?

When the data is reasonably normally-distributed, Levene's and Bartlett's tests are comparable, with a slight edge to Bartlett's. (Use the Skewness and Kurtosis statistics to test for normality.)
However, Levene's test is less sensitive to departures from normality than Bartlett's. So if the Bartlett's test fails for a given column, it could be due to non-normality or heterogeneity of variance. But without evidence that the data is nearly normal, you cannot be certain that it is the heterogeneity of variance that the test is detecting.
Therefore Levene's test is the recommended option overall.
Reference:
Milliken and Johnson. Analysis of Messy Data. Chapman & Hall/CRC, 1992.
Back to top

The dose-response analysis is used in experiments where a treatment or chemical is applied at different rates, and the level of response to the dosage is recorded (as a percentage or count of individuals that responded). The analysis estimates the treatment rate/dosage that results in a response from a particular percentage of individuals in the study. One example is the LD50, which estimates the dosage level that results in a response of 50%, i.e. the median lethal dose. 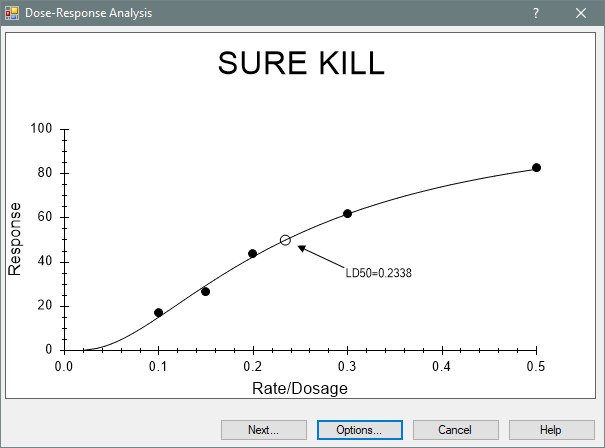